Thomas Holtz MArch ’77: A Lasting and Significant Impact at the GSD 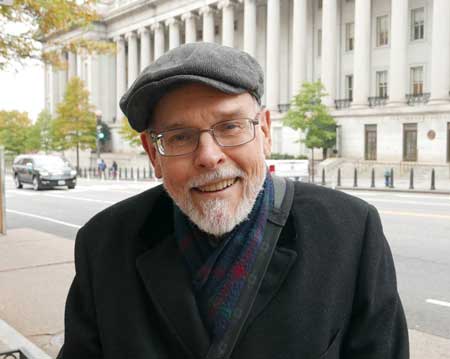 Thomas Holtz MArch ’77[/caption] Thomas Holtz MArch ’77 made his first mark on the Harvard University Graduate School of Design (GSD) library as an architectural draftsman. Holtz’s drawings in the Frances Loeb Library’s Special Collections trace the arc of his life and design career: the Cologne and Munich cathedrals in Germany, a country where Holtz studied as a Fulbright scholar under a German government grant and worked before and after his time at Harvard; Italian churches, reflecting Holtz’s Catholic faith and membership in the Secular Order of Discalced Carmelites and volunteer work with Mother Teresa's Missionaries of Charity; and the National Gallery of Art and other iconic buildings around Holtz’s birthplace and current home in the Washington, DC metro area. Holtz’s generosity and creativity built his second contribution to the library. The retired architect wanted to honor those who most influenced his graduate education and career: his parents and his design teacher Jerzy Soltan, the esteemed architect and beloved GSD professor who died in 2005. Through a charitable gift annuity and a future bequest, Holtz established the Jerzy Soltan Fund in memory of Leslie and Helen Holtz for the Frances Loeb Library at the Harvard University Graduate School of Design.

I wanted to give back to Harvard since they gave me fine teachers, and to honor both my parents and Soltan.

“At the beginning of Soltan’s class, we did research in architecture libraries, especially the GSD library, so we could do presentations of both modern and historic art and architecture before going into the design. Even though it was a design class, we made ample use of the library,” Holtz said. “I wanted to give back to Harvard since they gave me fine teachers, and to honor both my parents and Soltan.” A charitable gift annuity is a great option for alumni who, like Holtz, built an accomplished career but never thought of making a significant gift to the School. Holtz established the annuity with a simple contract with Harvard University. He received an immediate tax deduction for the gift, and Harvard will provide him with a regular income stream throughout his retirement. At the end of his lifetime, whatever money remains from the annuity comes to the GSD for the Jerzy Soltan Fund. Holtz elected to make an additional gift to the Soltan Fund by including a gift for the GSD in his will. Through this fund, Holtz will honor his parents and help with the acquisition, maintenance and other costs associated with a renowned collection of printed and other materials by and about Le Corbusier, in tribute to his collaborations with Soltan. “Anything to honor the collection is great,” Holtz said. “Le Corbusier was his master.” As Le Corbusier influenced Soltan, Holtz credits his parents with building a lifelong emphasis on learning. “We had plenty of books in the home, including National Geographic Magazine, and as a child, I would study different countries and different buildings,” Holtz said. “They took us often to the National Gallery, and I learned to love the pictorial arts and inherited my mother’s love of classical music.” His parents also made an impression on him with their kindness toward others, Holtz said, helping children in his neighborhood and inviting sanitation workers into their kitchen for hot soup during a particularly cold winter. His mother would later volunteer with Harvard’s Semitic Museum and sometimes host lunches for his fellow GSD students when Holtz was at Harvard, he said. When Holtz arrived at the GSD, he saw these qualities in Soltan as well. “He was very compassionate, and he had a great sense of humor,” Holtz said. “When our studio started with him, he came in at the beginning of the semester and said, ‘Whoever of you doesn’t want to be in my studio is fine with me. I have no lust for power!’” “Former GSD librarian Mary Daniels once wrote to me about him that it was ‘unusual to find someone who embodied both chic (by the broadest definition) and charity!’” Holtz added. “He was very kind to students.” After earning his master’s degree, Holtz held positions at private firms in Germany and Maryland before joining the U.S. Department of the Navy as an architect. He worked for the Navy in Carderock, Maryland, and the Washington Navy Yard, where he handled many large and small projects before his retirement in 2013. Holtz’s career recognitions include Employee of the Year in the Senior Engineer/Scientist category in 1994 at Carderock, a finalist for the Civilian of the Year Award in the public works department at the Navy Yard, and a certificate for participation in the World Trade Center Site Memorial Competition in 2003. A number of Holtz’s drawings and prints were also presented to Pope Benedict XVI and Pope Francis, and Holtz remembers Soltan’s appreciation for his drawings, including Le Corbusier’s Convent Sainte Marie de La Tourette in France.

We were thrilled to receive Mr. Holtz’s gift to the library. The connection to Le Corbusier runs deep here at the GSD, and we appreciate what this fund will do for our collection of his works. Professor Soltan was a wonderful man, and Mr. Holtz is truly honoring his legacy. ~ Anne Whiteside, GSD Librarian and Assistant Dean for Information Services

“We were thrilled to receive Mr. Holtz’s gift to the library,” said GSD Librarian and Assistant Dean for Information Services Ann Whiteside. “The connection to Le Corbusier runs deep here at the GSD, and we appreciate what this fund will do for our collection of his works. Professor Soltan was a wonderful man, and Mr. Holtz is truly honoring his legacy.” Holtz encourages alumni who remember Soltan’s kindness and mentorship to join him in honoring this remarkable educator with a contribution to the Jerzy Soltan Fund and making their own mark on the library. “I would encourage students not only in Soltan’s studio but also those who had experienced him in the juries for other studios that he was invited to critique on, to consider giving to this fund,” Holtz said. With this unique and accessible giving method, all GSD alumni who want to support the School can have a lasting and significant impact.   [gss gallery ids="7956,7955,7953,7954,8160"]